Take a guess…..I’ll give you a hint: it’s not thyroid cancer.

It’s chronic lymphocytic thyroiditis, better known by its eponym: Hashimoto’s thyroiditis.  Described by Hakaru Hashimoto in 1912 in a German surgical journal, based on the findings in 4 female patients, the disease to which his name would be given posthumously was originally called struma lymphomatosa. Hashimoto detailed four histologic characteristics which defined the disease, including 1) the formation of lymphoid follicles 2) the marked changes in the thyroid epithelial cells, 3) extensive formation of new connective tissue, and 4) diffuse round cell infiltration.  These findings and the original description of the disease, including its association with hypothyroidism, still stand today. 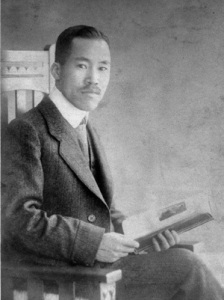 According to the American Association of Clinical Endocrinology, Hashimoto’s thyroiditis is the most common thyroid disease in the United States. It is an inherited condition that affects over 10 million Americans and is about seven times more common in women than in men. It is now known that Hashimoto’s thyroiditis is an autoimmune disease, in which the immune system mistakenly recognizes normal thyroid cells as foreign tissue, and it produces antibodies that may destroy these cells. Antithyroid antibodies can be tested for in Hashimoto’s patients, but antibodies are not present in all cases. 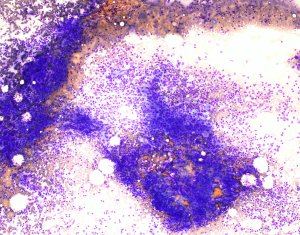 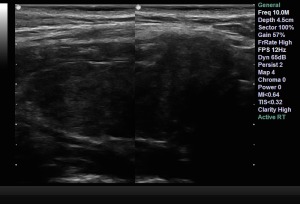 On ultrasound, patients with Hashimoto’s thyroiditis are shown to have diffusely hypoechogenic thyroids that can appear fibrotic and nodular. Sometimes these nodules are really not nodules at all, but rather they are pseudonodules due to lymphocytic infiltration and fibrosis of the thyroid parenchyma. Diffuse small cystic lesions can give a “swiss cheese” or spongiform appearance to the thyroid on ultrasound and there may be associated enlargement of the lymph nodes in the anterior neck.  In the early stages of Hashimoto’s, there may be hyperthyroidism associated with hypervascularity, known as hashitoxicosis, but Hashimoto’s thyroiditis can be associated with any degree of vascular flow.

When nodules in patients with Hashimoto’s thyroiditis are biopsied, a spectrum of cytologic features can be seen. The smears are usually hypercellular, but if the thyroid gland appears fibrotic on ultrasound, smears may be hypocellular. In general, however, two populations of cells, thyroid follicular cells and lymphocytes, are seen on the smears. The lymphocytic population is usually mixed, or heterogeneous. If it is not a mixed population of lymphocytes, one might suspect a lymphoproliferative process, since patients with Hashimoto’s thyroiditis are at increased risk for lymphoma. The thyroid follicular cells may show reactive changes and Hurthle cell changes. The degree to which these changes are present on the slides depends on the cellularity of the specimen obtained and the extent of the sampling that was taken.

A cytopathologist who has the ultrasound findings readily available will be more effective at correlating the cytologic findings. Having a cytopathologist either performing the ultrasound or present at the time when the ultrasound is being performed will help pull together the entire clinical picture for the patient and allow real-time communication of preliminary results of FNA biopsy.